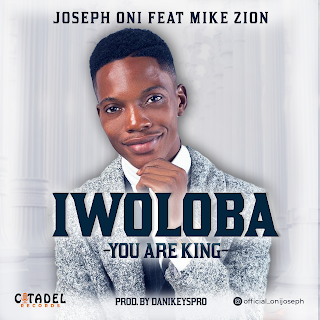 Gospel Singer, Joseph Oni releases debut single titled "Iwoloba" featuring Mike Zion.
Lagos based music minister, Joseph Oni, has released a fire brand single titled "Iwoloba". This song is sure to bring you to a place of worship and surrender.
Joseph Oni is a music minister, song writer, and choir director with a strong passion for the lost, and a desire to bring people into the presence of God.
Joseph is a man of the Word and Spirit,  and his songs are anointed and can bring fire to a dying soul.
His greatest desire for this generation is to see Jesus glorified in worship experience.
His debut single, "Iwoloba" which means "You are King" is a song of adoration and praise to the Father, acknowledging that He is King over all kings and
that He is unqestionable. It's a song that reminds us of the supremacy of God, that is He is enthroned forever.
Iwoloba was produced by Daniel James for Citadel Records.
DOWNLOAD HERE