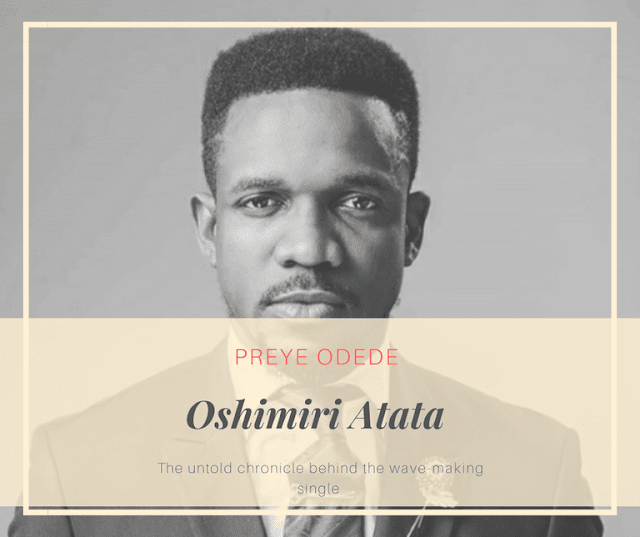 The ministry of Preye Odede will always remain distinct and cannot be replicated. You have some artiste that only come ones in a generation. The likes of Whitney Houston, Nath King Cole, Michael Jackson, Kirk Franklin, Donnie McClurkin, Sinach, Joepraize to name a few... and of course, there is Preye Odede!

Specially anointed for such a time as this, God's out-poured life embodied in a humble vessel that contrasts the magnitude of gift and anointing that is contained therein, Preye Odede combines aesthetics with anointing and the results are life transforming songs that have left their indelible marks in the sands of this generation, spiraling into undeniable testimonies, ricocheting all over the world!

When Preye Odede put out his debut album "My Script" in 2012, "Ebezina" stood out and infiltrated the core of Gospel Music till date. Speaking with Cool FM OAP, Jibike in 2014, he said he wrote "Ebezina" in the "middle of serious hardship. At a point where we were thrown out of our house and rendered homeless... in 2009."

"Bulie" was a follow up on the success of "Ebezina". The video has garnered over 2 million views on Youtube - Preye's channel alone. He featured a remix of the single in his 2017 sophomore album titled "Ready" and collaborated with UK based Ghanaian Gospel artiste, the critically acclaimed Sonnie Badu of "Baba" fame.

"I Am Real" shot by video director Patrick Elis in the USA presented Preye Odede in new light in terms of his brand. As the distinctive nature of his ministry attained zenith height, it couldn't be business as usual... literally. Preye's releases, presentations, PR strategies and overall outlook took a new turn as well!

He announced his sophomore album with the rapturous worship/supplication song with the title "Oshimiri Atata (River that never Runs Dry)". The song which critics have said, rivals the effort of "Ebezina", although there are similarities speckled all through both songs, received wide acceptance within and outside the country, so much that when the "Ready" album finally dropped, it's still one of the songs that stood out. He recently ministered the single in COZA, Abuja at Voltage Warship with Pastor Biodun Fatoyinbo and the atmosphere was electric! Pastor Fatoyinbo described the ministration as "an amazing time of worship!"

Taking a look at the transformation Preye Odede's life and ministry has experienced - before and after the debut album "My Script".  The amazing grace that came to his rescue did not transform his life and left him at the point but he has gone from grace to grace ever since. One will agree that the only appropriate outburst is "Oshimiri Atata (River that never Runs Dry)."

Talking about the journey so far and the future expectations, Preye Odede said:

"I don't look like my past because of God's grace and mercy ... At times when you are down and weary, draw strength from God, who is the fountain that never runs dry and with that river ever flowing, i am certain that God is set to supersede the present and do endless wonders in your life."