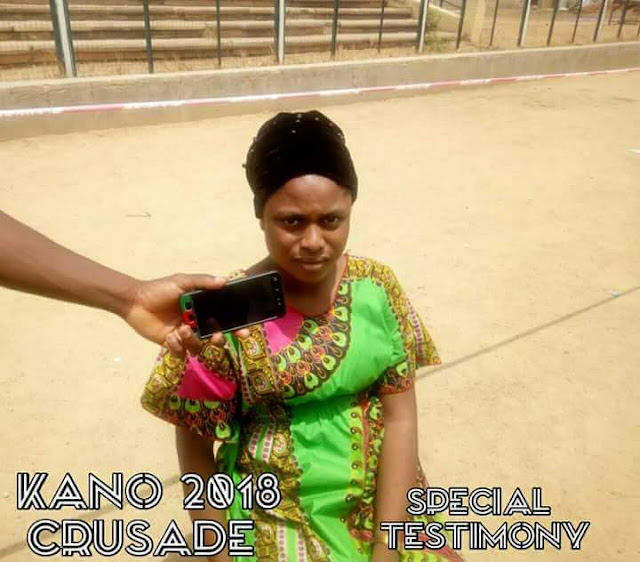 A woman identified as Vivian is filled with thanks to God for delivering her and other passengers from the hands of a ritual killer inside the bus while traveling to Kaduna state. The woman who is a member of The Lord's Chosen Int'l, said that the ritualist became powerless after sighting the church's apron as it was filled with fire.

Read the woman's testimony below as shared by the church;

She and her co-passengers were traveling, on getting to Kaduna, the vehicle had fault. It was repaired but later developed another fault. They were all afraid and decided to stop over after they had the premonition that something bad would happen. They started praying in the bus and powers took over everywhere.

They decided to search everybody in the bus, lo and behold, they saw some human heads with other incriminating objects inside a bag of the man sitting behind her. When he was accosted, he said he planned killing all of them on the way. This happened immediately our sister declared herself a Chosen three good times. Other things sighted in his bags were dead head of human being, dogs, cow, cat, hen and other animals, etc.

Everyone in the bus became surprise and started shouting Jesus. They asked the man who owned the bag, what his missions was, and he replied that his mission was to kill all the people at the bridge in Lokoja but the girl sitting at his front was wearing an apron (Chosen Apron). When he looked at the apron, it was fire to him.

As they came out, the man asked her (Sis Vivian) to step forward. Other passengers were asking her, if she had anything to do with the man and she said no. She made known who she is to them, that she's a Chosen and why the man was asking her to come out, he said the apron she wore is filled with fire.

On hearing that, people began to shout, bullet proof! bullet proof!! bullet proof!!! Her co-passengers asked her the location of the Lord's Chosen Church she attends and she directed them. A woman in the bus said she don't talk evil about our G.O, that she knows our G.O is a true man of God.

This is how God delivered them and granted them journey mercies. The man (the ritualist) was handed over to the police. She's returning all glories unto our only good God who did this to her.