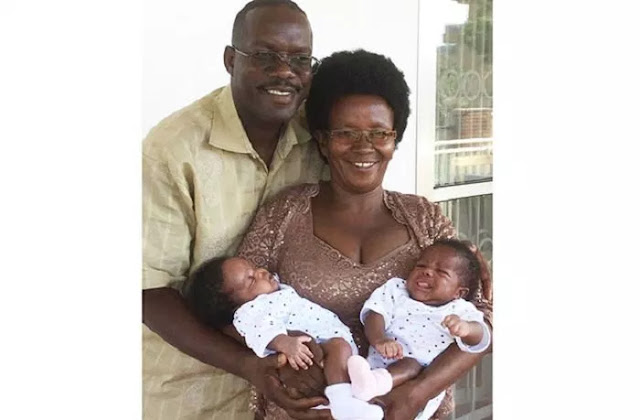 Pastor Frank and his wife Phobice tied the knot on December 28, 1992 and were eager to start a family.  But year after year, Anita still wasn’t pregnant. They tried for 24 solid years.

In November last year, they were overjoyed when doctors told them they detected two heartbeats on their first ultrasound.

“It was a glorious occasion,” said dad Tweheyo in an interview with a state aided news daily.

At the time of their wedding, Frank, who is also the African Program Director at Empower International Ministries, had just assumed the pastoral role of heading Kabale Christian Fellowship Church after the death of the lead pastor and his wife.

The initial years were not easy as we earned no salaried income and relied on divine provision, Pr Frank revealed.

“In 1996 when Pr Robert Kayanja came for a one-week crusade in Kabale, I was chosen to interpret for him. At that time, I had only one prized shirt, which was blue. My wife used to wash it at night and iron it for the nest service,” Pastor Frank said.

During that time, the couple lived on a single meal and some days slept on an empty stomach. Pastor Tweheyo says it was then that their trust in God was nurtured and tested.

Unknown to the preacher then, it was those initial years that laid a solid foundation of trust in God, for the pressure that would later come with childlessness.

“Although we wanted to start a family, we were not in hurry since we both got married while still young, but as years advanced and people started taunting and insulting us about failure to have children, it became an issue,” Frank added.

10 years into their marriage, more pressure mounted on the Pastor and his wife, and were confronted with accusations of being bewitched.

Even as their faith waned, the couple still found hope in the Bible.

Frank recalls, “During that time, I took the matters to God, who had joined us together to bless us with Children.”

Phobice said , her family, especially her mother, was supportive and always believed that her daughter would have children.

Sadly, she passed in when her daughter was only two months pregnant.

Frank’s family and some members of the church were unforgiving; some felt that Phobice had failed their pastor to have biological children.

According to the newspaper, He revealed an incidents when he had to slap a member of the church who wanted to sleep with him so that he could have babies.

“Some boldly asked me why I was concentrating in a ‘childless’ woman,” he said.

The couple then decided to go for a medical checkup which gave them a clean bill of health. From that time, they buried themselves in prayer as they sought to handle their plight.

They bought a suitcase and started stocking twins clothes. This continued for the next 14 years.

Early 2016, Phobice conceived and the couple were thrilled with the news. The celebration unfortunately didn’t last long as Phobice had a miscarriage at the second month.

“Although our hopes were shattered, I felt that God could do it again,” she said.

Exactly a year later in 2017, Phobice conceived again and when they went for a scan, it showed that she was expecting twins.

Phobice’s second pregnancy, according to the New Vision, was fraught with challenges.

At the fourth month, she fell in a ditch and in the sixth month, she had a cough which was feared to put pressure on her uterus. During her seventh month, Phobice fainted in Church and was admitted for treatment.

God was on the couple’s side through the storm, and on November 10, 2017, at the age of 48, Phobice welcomed twins, Samuel and Samalie Tweheyo.

To this day, all of the babies are said to be “doing well and continue to thrive.”

“To those going through different challenges, God is not your enemy but a present help in your need and He knows the perfect time to act. If God answered our prayer at 24 years, He can do it for anyone who believes in Him,” Pastor Frank says